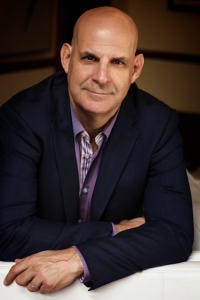 Harlan’s novel TELL NO ONE (NE LE DIS A PERSONNE) was turned into the renowned French film, directed by Guillaume Canet and starring Francois Cluzet. The movie was the top box office foreign-language film of the year in USA, won the Lumiere (French Golden Globe) for best picture and was nominated for nine Cesars (French Oscar) and won four, including best actor, best director and best music.

In his first books, Coben immersed himself in the exploits of sports agent Myron Bolitar. Critics loved the series, saying, “You race to turn pages…both suspenseful and often surprisingly funny” (People). After seven books Coben wanted to try something different. “I came up with a great idea that simply would not work for Myron,” says Coben. The result was the critically acclaimed New York Times bestseller TELL NO ONE, which became the most decorated thriller of the year. Two books later, Bookspan, recognizing Coben’s broad international appeal, named NO SECOND CHANCE its first ever International Book of the Month in 2003 – the Main Selection in 15 different countries.

Harlan was the first writer in more than a decade to be invited to write fiction for the NEW YORK TIMES op-ed page. His Father’s Day short story, THE KEY TO MY FATHER, appeared June 15, 2003. His essays and columns have appeared in many top publications including the New York Times, Parade Magazine and Bloomberg Views.

Harlan has received an eclectic variety of honors from all over the world. In Paris, he was awarded the prestigious Vermeil Medal of Honor for contributions to culture and society by the Mayor of Paris. He was won the El Premio del Novela Negra RBA in Spain, the Grand Prix de Lectrices in France, and the CWA/ITV3 Bestseller Dagger for favorite crime novelist in England. On the other end of the spectrum, Little League Baseball inducted Harlan into their Hall of Excellence in 2013, and Harlan is also a member of the New England Basketball Hall of Fame from his playing days at Amherst College.

Harlan was born in Newark, New Jersey. He still lives in New Jersey with his wife, Anne Armstrong-Coben MD, a pediatrician, and their four children.