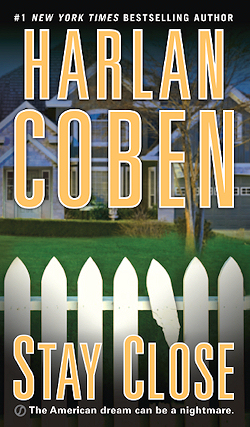 When the past refuses to stay buried, three people will discover that the American dream can be a nightmare . . .

Megan is a suburban soccer mom who once upon a time walked on the wild side. Now she’s got two kids, a perfect husband, a house with a picket fence, and a growing sense of dissatisfaction. Ray used to be a talented documentary photographer, but at the age of forty he finds himself in a dead-end job posing as a paparazzo pandering to celebrity-obsessed rich kids. Broome is a detective who can’t let go of a cold case – the disappearance of a local husband and father seventeen years ago.

As the terrible consequences of long-ago events collide in the present, three people living lives they never wanted, hiding secrets that not even those closest to them would ever suspect, will come to realise that the past never truly fades away. And as each confronts the dark side of the American dream – the boredom of suburban life, the thrill of temptation, the desperation that can lurk behind even the prettiest facades – they will discover the hard truth that the line between one kind of life and another can be as whisper thin as a heartbeat.

Global bestseller Harlan Coben returns with a stunning new standalone novel – a powerful psychological thriller that explores how our decisions define us and how our present selves are inescapably shaped by our pasts.

Check out the 4 Star Review in People Magazine.

Stay Close
“Edgar-winner Coben (Caught) continues to mine rich veins of terror in his New Jersey novels of domestic suspense, exploring both the reality and the ideal of family ties and the ease with which evil can destroy both.

In this masterful stand- alone, three people are haunted by the disappearance of Stewart Green 17 years earlier in Atlantic City: photographer Ray Levine; housewife Megan Pierce; and Detective Broome, who investigated the disappearance and befriended Green’s wife and kids.

The disappearance of Carlton Flynn on February 18, the same date Green went missing, helps reignite the smoldering case, pointing the way to other victims and a strange pattern. Flynn’s case also results in a pair of preppie, very scary sadists calling themselves Ken and Barbie entering the scene. Coben writes with wit and irony, and his flair for exposing the frail balance point between order and chaos in our lives has never been stronger than in this suspenseful outing.”

Stay Close
“Coben’s title describes perfectly how the suspense in this tour-de-force stand-alone works. It stays close in an unbelievably sustained way, giving the reader a steady steam of jolts and sinking feelings, as Coben’s three main characters face danger from without and from their own tricky psyches. These three characters are mired in the past. They all got stuck there when a family man with a secret life went missing 17 years ago. Ray is a former AP photojournalist who has become a drunk and a professional bottom-feeder as a photographer for a service that hires fake paparazzi. Coben’s descriptions of Ray’s work (especially for the poor slob who hires him on a succession of first dates) is side-splittingly funny. The second character seems to be doing great—Megan is a wealthy, tennis-playing, SUV-driving suburban mom—but she yearns for her former life as an exotic dancer. And Broome is a detective who became too involved with the family of the missing man and can’t shake the case. When another local man disappears, Broome intensifies the investigation, discovering that 14 men have vanished on Mardi Gras over the last 17 years.

Coben excels in descriptions of his characters’ tortured, ruminative inner lives. He also can pull out of their psychological nosedives to deliver some of the most shocking action scenes in current crime fiction. Once again, Coben uses the dives of Atlantic City as a backdrop, and what he does with the six-story pink construction known as Lucy the Elephant is worthy of Hitchcock. Satisfying on every level.

HIGH-DEMAND BACKSTORY: Coben’s stand-alone thrillers are as close as one can come in publishing to sure-thing best-sellers, even without the full-court marketing press this one will have behind it.”

“Megan Pierce has a closet full of skeletons that have been hidden for years. The fast life she once lived as a dancer in Atlantic City has been replaced with a life in the New Jersey suburbs, two children, and a loving husband. Yearning for the thrills of her former life, Megan pays what she believes to be an incognito visit to her former haunt. Her path soon crosses with Detective Broome, who is deep in the case of a man missing for 17 years and facing the possibility of a serial killer. Megan is forced to expose her racy past and reconnect with former lovers in order to help Broome put an end to the violence.  Verdict While the story of suburban families tangled in dark situations is familiar, Coben (Live Wire) still engages readers from the first page. A plot layered with twists, action, and a scandalous history will have his many fans flying through this new offering. Coben devotees have come to expect certain thrills, and they will not be disappointed.”
– Library Journal

“With Mr. Coben’s combination of thrills and intelligence, he leads readers into the ‘dark side’ of life and delivers his trademark style of exhilarating and captivating writing in a true novel of suspense.”
– Suspense Magazine

“When everything explodes, the payoff is glorious. Stay Close is a perfect example of a master at the top of his game.”
—Associated Press

“In Stay Close, Coben again shows his acumen for delving into our most intimate fears as he moves his engrossing story from quiet domesticity to sheer terror while keeping us highly entertained.”
—Sun-Sentinel (South Florida)

“When you read a Coben novel you are absorbed by it. His writing draws you into the world he has created and you get to know the characters totally…. [Stay Close] is intense, the characters are interesting, and the writing is magnificent. Coben’s talent is in high gear as he takes his readers to the magical world of Atlantic City, a place where dreams either come true or die.”
—Jackie K. Cooper, The Huffington Post

“The narration hums and dances and sings like nothing [Coben] has done before, and his characters are so real this time around that they almost seem to rise off the printed page.”
—Bookreporter.com