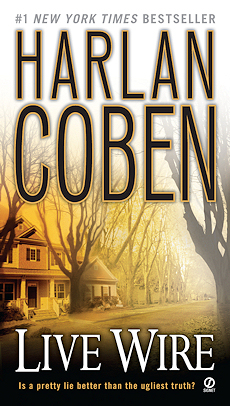 #1 New York Times bestselling author Harlan Coben proves once again that “nobody writes them better”* in a thriller that asks a provocative question:

Is a pretty lie better than the ugly truth?

Harlan Coben published his first Myron Bolitar thriller, Deal Breaker, in 1995, introducing a hero that would captivate millions. Over the years we have watched Myron walk a tight rope between sports agent, friend, problem solver and private eye, his big heart quick to defend his client’s interests so fiercely that he can’t help but jump in to save them, no matter the cost.

When former tennis star Suzze T and her rock star husband, Lex, encounter an anonymous Facebook post questioning the paternity of their unborn child, Lex runs off, and Suzze – at eight months pregnant – asks Myron to save her marriage, and perhaps her husband’s life. But when he finds Lex, he also finds someone he wasn’t looking for: his sister-in-law, Kitty, who along with Myron’s brother abandoned the Bolitar family long ago.

As Myron races to locate his missing brother while their father clings to life, he must face the lies that led to the estrangement – including the ones told by Myron himself. If we thought we knew Myron Bolitar, Coben now proves we didn’t. An electric, stay-up-all night thriller that unfolds at a breakneck pace, Live Wire proves that Harlan Coben still has the ability to shock us anew.

“Edgar-winner Coben’s 10th Myron Bolitar novel (after Long Lost) is a perfect 10: providing readers with new information about the past of the former athlete turned agent and owner of MB Reps; a satisfyingly complex mystery; and the always entertaining, sometimes shocking exploits of Bolitar’s partner and friend, Windsor Horne Lockwood III (aka Win). Suzze Tervantino, a former tennis prodigy and one of Bolitar’s first clients, visits his New York office and shows him a Facebook posting that suggests that her husband, rock star Lex Ryder, isn’t the father of the child she’s carrying. When Ryder, also a client of MB Reps, disappears, Suzze begs Bolitar to find him. In the process, Bolitar catches a glimpse of his sister-in-law, Kitty, at a crowded nightclub, and begins a search for her and his estranged younger brother, Brad, whom he hasn’t seen for 16 years. This explosively fast thriller will leave fans clamoring for more.”
—PUBLISHERS WEEKLY, Starred Review (MAR)