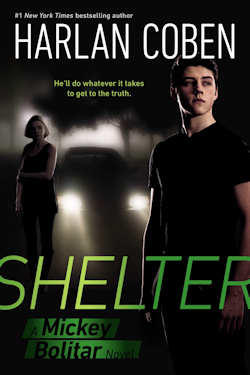 “A mysterious old lady, a terrible evil, a courageous young hero, and a secret that could turn his world upside down—the suspense never lets up. The ending will leave you breathless. I can’t wait for Mickey Bolitar’s next adventure.”
—Rick Riordan, #1 New York Times bestselling author of the Percy Jackson and the Olympians series
“As in all great thrillers, Coben piles mystery on top of mystery until the suspense is almost unbearable. So many twists and shocks, I wanted to scream. But I had to keep reading instead.”
—R. L. Stine, international bestselling author of the Goosebumps series
“Gimme Shelter. And give it to my daughters, my nephews, and anyone else who wants a spellbinding novel of mystery and intrigue, adolescence and adulthood, crime and punishment from a writer who’s at the very top of his game. I have one word for you: Wow!”
—Ridley Pearson, New York Times bestselling author of the Kingdom Keepers and Steel Trapp series
“Shelter is a powerhouse thriller with a heart that beats like a triphammer. If you are looking for THE BOOK to get you hooked on reading, this is it. Pulses with excitement, Shelter will make your heart race long after the last page. Harlan Coben has created a hero worth following to hell and back.”
—Eoin Colfer, New York Times bestselling author of the Artemis Fowl series
“Harlan Coben is a terrific storyteller—a master of mystery, mounting tension and head-snapping plot twists. He showcases these skills brilliantly in Shelter, along with a pitch-perfect voice for teen characters up against both mortal danger and high school. It’s a riveting and highly entertaining combination.”
—Dave Barry, co-author of the Peter and the Starcatcher series

“In this suspenseful, well-executed spinoff of his bestselling Myron Bolitar mystery series for adults, Coben introduces readers to Myron’s nephew Mickey, a high school sophomore who is reluctantly living with his uncle after his father died in a car crash and his mother went into rehab. When Mickey’s new girlfriend, Ashley, vanishes just weeks into the school year, Mickey attempts to find her. With the aid of new friends Spoon and Ema, Mickey discovers that everything he knew about Ashley was false, and the truth is fraught with danger. Simultaneously, he looks into the history of the enigmatic Bat Lady, a local recluse who claims to have knowledge of his father. As the two mysteries intertwine, Mickey learns more than he ever expected about those closest to him. While Mickey’s voice is occasionally too sophisticated for his age, and he’s a little too good to be true, it doesn’t make this thriller any less enjoyable. Coben’s semi-noir style translates well to YA, and the supporting cast is thoroughly entertaining. It’s a strong start to the series.
–Publishers Weekly

“Mickey Bolitar’s life is a mess—his mom is in rehab for a serious drug addiction, he recently saw his father die, and he is living with an uncle he just met. Then the local crazy lady tells Mickey that his father isn’t dead and promptly disappears, and Ashley, Mickey’s crush, abruptly stops attending school. Mickey enlists the help of two fellow outcasts to find them. The trio stumbles into a worldwide organization that endeavors to save all childhood victims of cruelty and violence. In the fast-paced conclusion, they must rely on their intelligence and luck to save themselves from life threatening situations. With dry wit and taut pacing, Coben has created a welcome spinoff from his adult mysteries for the young adult market. Younger teen readers will hope Mickey’s story continues, while older teens will enjoy devouring the adult series while awaiting the highly anticipated next Mickey novel.”
–Library Media Connection, Starred review

“Being the new kid at his high school is the least of Mickey Bolitar’s worries; how about a missing girlfriend and dad’s possible rising from the dead?

Walking to school one morning, Mickey is accosted by an eerie old lady (whom he dubs Bat Lady) who dramatically declares that his father is alive, despite the fact that Mickey saw his dad die in a car accident. Bat Lady is only on a back burner of Mickey’s lively mind; in the forefront is finding out what happened to new girlfriend Ashley Kent, who stopped coming to school one day. Attempts to learn more have been stonewalled by teachers and the administration. Mickey teams up with two unlikely sidekicks: Ema, a sarcastic overweight goth girl whom Mickey rescued from humiliation in gym class, and Spoon, a hacker nerd who knows all about Mickey’s mad basketball skilz (which he’s keeping under wraps). Many daredevil acts ensue. This teen spinoff of the prolific Coben’s adult Myron Bolitar (Mickey’s uncle) series (Long Lost, 2009, etc.) benefits greatly from his trademark crackerjack pace and multi-layered plotting. Most of the time, Mickey’s short-attention-span snark seems both age appropriate and believable. His mother’s struggle with drug addiction adds poignancy. A not-bad-at-all entry into the teen market for this adult author.”
–Kirkus

“Coben’s first YA novel starts off with a bang and keeps going strong until the end. Sophomore Mickey Bolitar’s happy, globe-trotting family returned to the States so that the teen could complete high school. Then Mickey sees his father killed in an accident and his bereft mother, who has taken to using drugs, enters rehab. Mickey goes to live with his Uncle Myron. On the way to school one morning, he encounters the Bat Lady, an old woman who lives in a dilapidated house, who tells him that his father is not dead, and disappears. Strangely enough, Ashley, a girl with whom Mickey has formed a relationship, also disappears. When he tries to find out what happened to her, he learns more than he bargained for about Ashley, the Bat Lady, and his own family. The cast includes Spoon, who has a tendency to spout odd bits of information at the wrong time; Ema, a self-proclaimed “fat girl” who dresses all in black, is covered in tattoos, and has some secrets of her own; and Rachel, the hottest girl in school. Myron Bolitar, the protagonist in Coben’s adult mystery series, tries to take care of Mickey but doesn’t really know how to be a parent. The boy has more freedom than most teens, giving him the opportunity to search for answers to his questions. Edgy and action-filled, the novel has interesting, likable characters, and it should fly off the shelves. The ending ties up some loose ends but leaves readers awaiting the sequel.”
–School Library Journal

“Harlan Coben’s young adult debut might be a new direction for the internationally best-selling author, but Shelter treads familiar and much-loved terrain. Coben has written 10 books on wisecracking sports agent Myron Bolitar, and the end of the latest, Live Wire, left the Bolitar legacy in the hands of Myron’s nephew, Mickey Bolitar.

Mickey resembles his uncle in many ways, including his 6-foot stature and basketball wizardry. Unfortunately, the two don’t get along—but after Mickey’s parents vanish from his life (his father dies in a car accident; his junkie mom admits herself to rehab), he’s stuck with Uncle Myron as a guardian.
Despite Myron’s experience in digging himself out of danger, Mickey has no interest in seeking help from his uncle when things start to get weird at his new high school. His sort-of-girlfriend vanishes and the crazy Bat Lady who lives in a dilapidated mansion sends him a disturbing message: His father is not dead. Mickey is soon sneaking into strip bars, questioning tattoo artists and chasing down the suited man who seems to be following him—all in search of the truth.

In true Coben spirit, Mickey acquires two ragtag sidekicks in the course of his search: Ema, a sharp-tongued, overweight Goth girl, and Spoon, a geeky guy whose easy access to security tapes and personnel files secures his place on the team.

Shelter has all the twists and turns of a Coben classic, but on a teen scale—including run-ins with the hottest girl in school and confrontations with a brutish bully. Full of mystery that stretches back through Mickey’s and Myron’s past, Shelter will turn more than a few young readers into excited Coben fans.”
–BookPage

“Mega-successful mystery and thriller writer Coben launches a spin-off to his long-running Myron Bolitar series for adults by having the sports agent–sleuth’s nephew, high-school sophomore Mickey, come to live with him. Mickey’s got problems and mysteries of his own: his father died eight months ago, his mother is a relapsed junkie, and the cool girl he has just met in high school has disappeared. (And Mickey’s not nuts
about long-estranged Uncle Myron, either.) Disturbed by the vanishing of his friend, Mickey investigates on his own, getting lost and beaten and nearly destroyed by the underworld he discovers. This series opener gets off to a slow start, with Coben trying to establish that he knows some high-school lingo, what texting is, and so forth. Mickey himself, the first-person narrator, often sounds more middle-aged than teen. The resolution, though, is quite satisfying and points to a good deal of potential for what might come next.”
–Booklist

Check out “Shelter” by David Berkeley