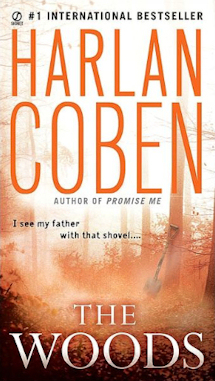 Available Now in the US & UK

“Harlan Coben is the modern master of the hook-and-twist–luring you in on the first page, only to shock you on the last.”
—Dan Brown, author of  THE DaVINCI CODE

I see my father with that shovel.There are tears streaming down his face. An awful, guttural sob forces its way up from deep in his lungs and out through his lips. He raises the shovel up and strikes the ground. The blade rips into the earth like it’s wet flesh.I am eighteen years old, and this is my most vivid memory of my -father—him, in the woods, with that shovel. He doesn’t know I’m watching. I hide behind a tree while he digs. He does it with a fury, as though the ground has angered him and he is seeking vengeance.I have never seen my father cry before—not when his own father died, not when my mother ran off and left us, not even when he first heard about my sister, Camille. But he is crying now. He is crying without shame. The tears cascade down his face in a freefall. The sobs echo through the trees.

This is the first time I’ve spied on him like this. Most Saturdays he would pretend to be going on fishing trips, but I never really believed that. I think I always knew that this place, this horrible place, was his secret destination.

Because sometimes, it is mine too.

I stand behind the tree and watch him. I will do this eight more times. I never interrupt him. I never reveal myself. I think he doesn’t know that I am there. I am sure of it, in fact. And then one day, as he heads to his car, my father looks at me with dry eyes and says, “Not today, Paul. Today I go alone.”

I watch him drive off. He goes to those woods for the last time.

On his deathbed eighteen years later, my father takes my hand. He is heavily medicated. His hands are rough and calloused. He used them his whole life—even in the flusher years in a country that no longer exists. He has one of those tough exteriors where all the skin looks baked and hard, almost like his own tortoise shell. He has been in immense physical pain, but there are no tears.

He just closes his eyes and rides it out.

My father has always made me feel safe, even now, even though I am now an adult with a child of my own. We went to a bar three months ago, when he was still strong enough. A fight broke out. My father stood in front of me, readying to take on anyone who came near me. Still. That is how it is.

I look at him in the bed. I think about those days in the woods. I think about how he dug, how he finally stopped, how I thought he had given up after my mother left.

My father is suddenly agitated.

I want to beg him not to die, but that wouldn’t be right. I had been here before. It doesn’t get better—not for anyone.

He does not calm down. He tries to sit up. I want to help him, but he shakes me off. He looks deep into my eyes and I see clarity, or maybe that is one of those things that we make ourselves believe at the end. A final false comfort.

One tear escapes his eye. I watch it slowly slide down his cheek.

“Paul,” my father says to me, his voice still thick with a Russian accent. “We still need to find her.”

“Did you know?” he asks, his voice barely audible.

I feel my entire body quake, but I don’t blink, don’t look away. I wonder what he sees, what he believes. But I will never know.

Because then, right then, my father closes his eyes and dies.