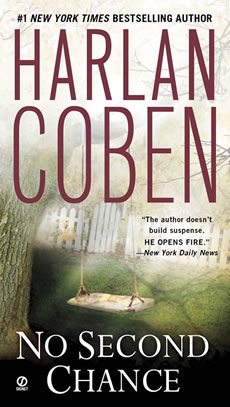 “Very few writers induce in their readers the kind of trancelike state, punctuated by frequent “wows,” that most of us associate with much-loved books from childhood. Coben can.”
— Booklist (starred review)

From New York Times bestselling author Harlan Coben comes an explosive novel about the love of a father, in a story where nothing is what it seems-and where hope and fear collide in the most surprising ways.

When the first bullet hit my chest, I thought of my daughter…

Marc Seidman awakens to find himself in an ICU, hooked up to an IV, his head swathed in bandages. Twelve days earlier, he had an enviable life as a successful surgeon, living in a peaceful suburban neighborhood with his beautiful wife and a baby he adored. Now he lies in a hospital bed, shot by an unseen assailant. His wife has been killed, and his six-month-old daughter, Tara, has vanished. But just when his world seems forever shattered, something arrives to give Marc new hope: a ransom note.

We are watching. If you contact the authorities, you will never see your daughter again. There will be no second chance.

The note is chilling, but Marc sees only one thing-he has the chance to save his daughter. He can’t talk to the police or the FBI. He doesn’t know who he can trust. And now the authorities are closing in on a new suspect: Marc himself. Mired in a deepening quicksand of deception and deadly secrets-about his wife, about an old love he’s never forgotten, and about his own past-he clings to one, unwavering vow to bring home Tara, at any cost. Both a white-knuckle thriller and an emotionally powerful tale about the loyalty of old friends and the bond between parent and child, No Second Chance is another masterpiece from an author who writes “suspense at its finest” (Jeffrey Deaver).

When the first bullet hit my chest, I thought of my daughter.At least, that is what I want to believe. I lost consciousness pretty fast. And, if you want to get technical about it, I don’t even remember being shot. I know that I lost a lot of blood. I know that a second bullet skimmed the top of my head, though I was probably already out by then. I know that my heart stopped. But I still like to think that as I lay dying, I thought of Tara.

FYI: I saw no bright light or tunnel. Or if I did, I don’t remember that either.

Tara, my daughter, is only six months old. She was lying in her crib. I wonder if the gunfire frightened her. It must have. She probably began to cry. I wonder if the familiar albeit grating sound of her cries somehow sliced through my haze, if on some level I actually heard her. But again I have no memory of it.

What I do remember, however, was the moment Tara was born. I remember Monica-that’s Tara’s mother-bearing down for one last push. I remember the head appearing. I was the first to see my daughter. We all know about life’s forks in the road. We all know about opening one door and closing another, life cycles, the changes in seasons. But the moment your child is born … it’s beyond surreal. You have walked through a Star Trek-like portal, a full-fledged reality transformer. Everything is different. You are different, a simple element hit with a startling catalyst and metamorphosed into one far more complex. Your world is gone; it shrinks down to the dimensions of-in this case, anyway-a six-pound fifteen-ounce mass.

Fatherhood confuses me. Yes, I know that with only six months on the job, I am an amateur. My best friend, Lenny, has four kids. A girl and three boys. His oldest, Marianne, is ten, his youngest just turned one. With his face permanently set on happily harried and the floor of his SUV permanently stained with congealed fast food, Lenny reminds me that I know nothing yet. I agree. But when I get seriously lost or afraid in the realm of raising a child, I look at the helpless bundle in the crib and she looks up at me and I wonder what I would not do to protect her. I would lay down my life in a second. And truth be told, if push came to shove, I would lay down yours too.
So I like to think that as the two bullets pierced my body, as I collapsed onto the linoleum of my kitchen floor with a half-eaten granola bar clutched in my hand, as I lay immobile in a spreading puddle of my own blood, and yes, even as my heart stopped beating, that I still tried to do something to protect my daughter.

I came to in the dark.

I had no idea where I was at first, but then I heard the beeping coming from my right. A familiar sound. I did not move. I merely listened to the beeps. My brain felt as if it’d been marinated in molasses. The first impulse to break through was a primitive one: thirst. I craved water. I had never known a throat could feel so dry. I tried to call out, but my tongue had been dry-caked to the bottom of my mouth.
A figure entered the room. When I tried to sit up, hot pain ripped like a knife down my neck. My head fell back. And again, there was darkness.
————————–

When I awoke again, it was daytime. Harsh streaks of sunlight slashed through the venetian blinds. I blinked through them. Part of me wanted to raise my hand and block the rays, but exhaustion would not let the command travel. My throat was still impossibly parched.
I heard a movement and suddenly there was someone standing over me. I looked up and saw a nurse. The perspective, so different from the one I was used to, threw me. Nothing felt right. I was supposed to be the one standing looking down, not the other way around. A white hat-one of those small, harshly triangular numbers-sat like a bird’s nest on the nurse’s head. I’ve spent a great deal of my life working in a wide variety of hospitals, but I’m not sure I’ve ever seen a hat like that outside of TV or the movies. The nurse was heavyset and black.
“Dr. Seidman?”
Her voice was warm maple syrup. I managed a very slight nod.
The nurse must have read minds because she already had a cup of water in her hand. She put the straw between my lips and I sucked greedily.
“Slow down,” she said gently.
I was going to ask where I was, but that seemed pretty obvious. I opened my mouth to find out what had happened, but again she was one step ahead of me.
“I’ll go get the doctor,” she said, heading for the door. “You just relax now.”
I croaked, “My family …”
“I’ll be right back. Try not to worry.”