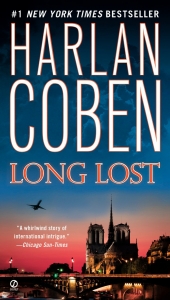 Available now in the US & UK.

“Myron Bolitar takes on international terrorists in bestseller Coben’s fast-paced ninth thriller to feature the sports and entertainment agent (after Promise Me)…. Bolitar fans will cheer their hero every step of the way.”
—Publishers Weekly

Myron Bolitar hasn’t heard from Terese Collins since their torrid affair ended ten years ago, so her desperate phone call from Paris catches him completely off guard. In a shattering admission, Terese reveals the tragic story behind her disappearance—her struggles to get pregnant, the greatest moment of her life when her baby was born…and the fatal accident that robbed her of it all: her marriage, her happiness and her beloved only daughter.

Now a suspect in the murder of her ex-husband in Paris, Terese has nowhere else to turn for help. Myron heeds the call. But then a startling piece of evidence turns the entire case upside down, laying bare Terese’s long-buried family secrets…and the very real possibility that her daughter may still be alive.

In grave danger from unknown assailants in a country where nothing is as it seems, Myron and Terese race to stay a step ahead of Homeland Security, Interpol, and Mossad. Soon they are working at breakneck pace, not only to learn what really happened to Terese’s long-lost little girl— but to uncover a sinister plot with shocking global implications.

“YOU don’t know her secret,” Win said to me.

“Then maybe I don’t want to know.”

Two days before I learned the secret she’d kept buried for a decade—the seemingly personal secret that would not only devastate the two of us but change the world forever—Terese Collins called me at five AM, pushing me from one quasi-erotic dream into another. She simply said, “Come to Paris.”

I had not heard her voice in, what, seven years maybe, and the line had static and she didn’t bother with hello or any preamble. I stirred and said, “Terese? Where are you?”

“In a cozy hotel on the Left Bank. You’ll love it here. There’s an Air France flight leaving tonight at seven.”

It’s worth mentioning the bikini twice.

“Nearly a decade ago we ran away to an island as two lost souls. I thought that we would never see each other again, but we did. A few years later, she helped save my son’s life. And then, poof, she was gone without a trace—until now.

“Think about it,” she went on. “The City of Lights. We could make love all night long.”

I managed a swallow. “Sure, yeah, but what would we do during the day?”

“And vitamin E,” I said, smiling in spite of myself, “I can’t Terese. I’m involved.”

I wondered how she knew. “Yeah.”

“This wouldn’t be about her.”

“Sorry, but I think it would.”

“Would it matter if I said yes?”

“Nothing’s wrong. I want to spend a romantic, sensual, fantasy-filled weekend with you in Paris.”

Another swallow. “I haven’t heard from you in, what, seven years?”

“I left messages. I wrote letters. I tried to find you.”

“Where have you been all this time?”

“I will tell you everything when you get here.”

“I can’t. I’m involved with someone.”

“Do you remember when we met?”

It had been on the heels of the greatest disaster of my life. I guess the same was true for her. We had both been pushed into attending a charity event by well-meaning friends, and as soon as we saw each other, it was as if our mutual misery were magnetic. I’m not a big believer in the eyes being the windows of the soul. I had known too many psychos who could fool you to rely on such pseudo-science. But the sadness was so obvious in Terese’s eyes. It emanated from her entire being really, and that night, with my own life in ruins, I craved that.

Terese had a friend who owned a small Caribbean island not far from Aruba. We ran off that very night and told no one where we were going. We ended up spending three weeks there, making love, barely talking, vanishing and tearing into each other because there was nothing else.

“We both had been crushed. We never talked about it. But we both knew.”

“Whatever crushed you,” Terese said, “you were able to move past it. That’s natural. We recover. We get damaged and then we rebuild.”

“I couldn’t rebuild. I don’t even think I wanted to rebuild. I was shattered and maybe it was best to keep me that way.”

“Forget I called, Myron. Take care of yourself.”

And then she was gone.

Excerpt from LONG LOST © 2009 by Harlan Coben. Published by Dutton, a member of Penguin Group (USA) Inc. All rights reserved.