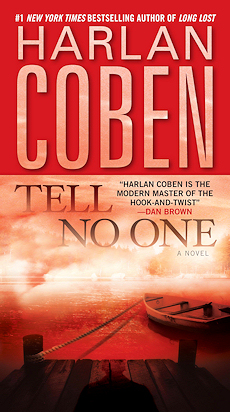 TELL NO ONE –“An International Bestseller.”

“I wanted to savor every clue, every detail, and I NEVER WANTED IT TO END.” — USA TODAY

TELL NO ONE is a story of loss and redemption. It begins innocently enough. Dr. David Beck and his beloved wife, Elizabeth, are celebrating the anniversary of their first kiss in the quiet of Lake Charmaine. They grew up together, first kissed at age twelve, and now, twenty-five years old and married less than a year, they return for an idyllic weekend away.

Tragedy shatters their solitude. Elizabeth is abducted and murdered, her body found in a ditch. Her killer is caught and brought to justice. But for David Beck, there can be no closure. Eight years pass. He never gets over Elizabeth’s murder. He loses himself in his work as an inner city pediatrician.

But everything changes on the eighth anniversary of Elizabeth’s death. Two unidentified bodies are found at Lake Charmaine, unearthed years after their deaths. But even more disturbing, Beck gets a bizarre email that mentions a specific phrase – a phrase known only to him and Elizabeth. The email also tells him to click a hyperlink the next day at a specific hour – “kiss time” – 6:15PM.

As this scene opens, Beck is about to see where the hyperlink will lead him. What he discovers will shock him like nothing else ever could….I checked the computer’s clock. It was hooked into some satellite that gave the exact time: 6:04.32 PM

To go to what?

The phones kept ringing. I tuned them out and drummed my fingers. Under ten minutes now. Okay, if there were going to be a change in the hyperlink, it would have probably happened by now. I put my hand on the mouse and took a deep breath.

My beeper went off.

I wasn’t on-call tonight. That meant it was either a mistake – something made far too often by the clinic night operators — or a personal call. It beeped again. Double beep. That meant an emergency. I looked at the display.

It was a call from Sheriff Lowell. It was marked “Urgent.”

I thought about it, but not for very long. Anything was better than stewing here with my own thoughts. I decided to call him back. I picked up the office phone, dialed nine to get an outside line, then the number on the LCD.

Lowell again knew who it was before he picked up. “Sorry to bother you, Doc.” Doc, he called me now. Like we were chums. “But I just have a quick question.”

I put my hand back on the mouse, moved the cursor over the hyperlink, and clicked. The web browser stirred to life.

The web browser was taking longer this time. No error message appeared.

“Does the name Sarah Goodhart mean anything to you?”

I almost dropped the phone.

I pulled the receiver away and looked at it as though it’d just materialized in my hand. I gathered myself together a piece at a time. When I trusted my voice, I put the phone back to my ear. “Why do you ask?”

Something started coming up on the computer screen. I squinted. One of those sky cams actually. Or street cam, I guess you’d call this one. They had them all over the web now. I sometimes used the traffic ones, especially to check out the morning delay on the Washington Bridge.

I needed to buy time. “Then I’ll call you back.”

I hung up. Sarah Goodhart. The name meant something to me. It meant a lot.

What the hell was going on here?

The browser stopped loading. On the monitor, I saw a street scene. The rest of the page was blank. No banners or titles. I knew you could set it up so that you only grabbed a certain feed. That was what we had here.

The camera was pointing down at a fairly busy street corner, from maybe fifteen feet off the ground. I didn’t know what corner it was or what city I was looking at. It was definitely a major city though. Pedestrians flowed mostly from right to left, heads down, shoulders slumped, briefcases in hand, downtrodden at the end of a work day, probably heading for a train or bus. On the far right, I could see the curb. The foot traffic came in waves, probably coordinated with the changing of a traffic light.

I frowned. Why had someone sent me this feed?

The feed was black and white. The way the shades of gray lit the worker-bees against the asphalt was almost artistic. A Bergman film maybe. Something like that. I kept my eyes glued to the screen and waited for the countdown as though it was New Year’s Eve. My pulse started speeding up. Ten, nine, eight….

Another tidal wave of humanity passed from right to left. I took my eyes off the clock. Four, three, two. I held my breath and waited. When I glanced at the clock again, it read: 6:15.02 PM

Nothing had happened – but then again, what had I expected?

The human tidal wave ebbed and once again, for a second or two, there was nobody in the picture. I settled back, sucking in air. A joke, I figured. A weird joke, sure. Sick even. But nonetheless—

And that was when someone stepped out from directly under the camera. It was as though the person had been hiding there the whole time.

It was a woman. That much I could see. Short hair, but definitely a woman. From my angle, I hadn’t been able to make out any faces so far. This was no different. At least, not at first.

The woman stopped. I stared at the top of her head, almost willing her to look up. She took another step. She was in the middle of the screen now. Someone else walked by. The woman stayed still. Then she turned around and slowly lifted her chin until she looked straight up into the camera.

I stuck a fist in my mouth and smothered a scream. I couldn’t breathe. I couldn’t think. Tears filled my eyes and started spilling down my cheeks. I didn’t wipe them away.

Another mass of pedestrians crossed the screen. Some of them bumped into her, but the woman didn’t move. Her gaze stayed locked on the camera. She lifted her hand up as though reaching toward me. My head spun. It was as though whatever tethered me to reality had been severed.

I was left floating helplessly.

She kept her hand raised. Slowly I managed to lift my hand. My fingers brushed the warm screen, trying to meet her halfway. More tears came. I gently caressed the woman’s face and felt my heart crumble and soar all at once.

She stayed there for another second or two. Then she said something into the camera. I couldn’t hear her, of course, but I could read her lips.

And then she walked away.

Tell No One Audio Book Sample

“Intricate plot twists keep pace with Beck as he desperately seeks proof that his wife did not die at the hands of a serial killer who nearly did him in as well. More than halfway through this book, I forced myself to read slowly. I wanted to savor every clue, every detail, and I NEVER WANTED IT TO END. There are numerous aspects to the clincher ending, with surprises in store for the reader until the very last page.”– USA TODAY

“Easily shifting from suspense to pathos, Coben expertly plumbs the intensity of mouring and the painful game of “what if” that comes with Beck’s spark of hope… Coben has crafted a beach read so gripping it ought to come with a jumbo tube of sunscreen. Bottom line: TELL EVERYONE.”

“Harlan Coben’s Tell No One begins at a run and in no time is moving at an all-out sprint… the characters are engaging and the strange goings-on will leave readers rapidly turning pages in search of fresh clues… Coben writes with wit and a shrewd sense of plotting.”

“TELL NO ONE has it all – a cast that crackles with real-life energy, pacing that will keep the most jaded reader breathless and, above all, a shimmering, multifaceted jewel of a plot with more delightful, unexpected twists than the world’s wildest roller coaster.”

“I don’t remember the last time I felt so driven to finish a novel. And the final 30 pages, well, you’ll see… Try to read TELL NO ONE slowly enough to appreciate Coben’s writing. It will be hard. But try.”

“WHAT A TREAT… A heck of a good mystery and thriller. Coben is gifted at creating characters, making us care about them and then twisting them like pretzels around plots that hold together like spring steel.”

“Page-turner scribes such as Jeffery Deaver and Lisa Scottoline rave over TELL NO ONE. Add humble moi to the list!”

“This is suspense at its finest–gut wrenching thrills and honest, heart-tugging emotion. A big book in every sense of the word, TELL NO ONE speeds along at such a break-neck pace that we have to remind ourselves continually to slow down and savor the writing–and Coben’s marvelous characters.”

“An exhilarating, bang-up, Porsche turbo of a novel that you absolutely will not put down.”

“TELL NO ONE is such a terrific thriller, you’ll want to tell everyone! Harlan Coben delivers the near-impossible–a can’t-put-it-down page-turner with a slam-bang surprise ending. You’ll read this book in one breathless gulp!”

“A thriller of runaway tension, TELL NO ONE electrifies with page after page of masterful suspense and explosive twists of fate.”

“TELL NO ONE opens with a gunt-wrenching scene that will leave you close to tears, and then propels you along… on a thrilling ride that will keep you constantly guessing, turning pages as quickly as you can, almost desperate to learn what happens next.”

“TELL NO ONE is non-stop action with plot twists galore.”

“Very exciting, fast moving, and a great piece of storytelling.”

“Coben’s latest thriller is the book everyone should take to the beach this summer… Tell everyone to read TELL NO ONE. Highly recommmended.“

“Taut, twisty… a quest for answers that’ll have you burning the midnight oil till 3:00 a.m. A gloriously exciting yarn.”

“A COMPELLING AND ORIGINAL SUSPENSE THRILLER… INTRIGUING… CLEVER AND UNIQUE.”

“This thriller moves from heartbreaking to heartstopping without missing a beat… Edgar winner Coben makes Beck (and the reader) walk a tightrope where one false move or word can spell doom.”

“I am almost ashamed to acknowledge that I am just now discovering Harlan Coben. Friends have told me for several years that I really needed to read his Myron Bolitar series. I haven’t. But I will. I promise. How could I not after reading his new non-series thriller, Tell No One?”

“If you like a good page-tuner, you’ll love this!… A fast-paced thriller of the highest order.”

“Fifteen pages into this book, you’re sucked in and Coben never lets the pace stall… If it takes more than two days to finish this one, you’re working too many hours. A hot summer rush.”

“Fast-paced… A tale that will have you hooked through the very unexpected climax.”

“TELL NO ONE is a headlong, full-tilt thriller… a gripping book.a doozy of a final revelation.”

Tell No One DVD