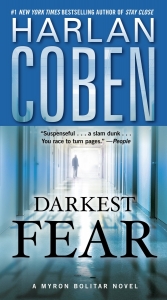 “You race to turn pages… both suspenseful and often surprisingly funny… A slam dunk.”
— PEOPLE Magazine Beach Book of the Week.

Myron faces the most emotionally shattering case of his career. And it all begins when Myron’s ex-girlfriend tells him he is a father-of a dying 13-year-old boy.

Chapter 1
The mobile phone blew him out of his sleep like a shotgun blast. Myron’s hand reached up blindly, his fingers bouncing along the night table until they located the phone.
“Hello?” he croaked.“Is this Myron Bolitar?”The voice was a whisper.“Who is this?” Myron asked.“You called me.”Still whispering, the sound like leaves skittering across pavement.Myron sat upright, his heartbeat picking up a little steam. “Davis Taylor?”“Sow the seeds. Keep sowing. And open the shades. Let the truth come in. Let the secrets finally whither in the daylight.”Ooookay. “I need your help, Mr. Taylor.”“Sow the seeds.”

“Yes, of course, we’ll sow away.” Myron flicked on the light. 2:17 am. He checked the LCD display on the phone. The Caller ID was blocked. Damn. “But we have to meet.”

“I understand, Mr. Taylor. Can we meet?”

“I’ll bring a key. Just tell me where you are.”

What to say? “It’s a matter of life and death.”

“Whenever you sow the seeds, it’s a matter of life and death.”

“You donated blood for a bone marrow drive. You’re a match. A young boy will die if you don’t help.”

“Technology cannot help him. I thought you were one of us.” Still whispering but sad now.

Silence, except for the sound of breathing. Myron wasn’t sure if the sound was coming from him or the caller.

“Please,” Myron said. “I’ll do whatever you ask. But we have to meet.”

“Will you remember to sow the seeds?”

Small chunks of ice dropped down his back.

“Good. Then you know what you must do.”

Myron gripped the receiver. “No,” he said. “What must I do?”

“The boy,” the voice whispered. “Say one last good-bye to the boy.”

“You race to turn pages… both suspenseful and often surprisingly funny… A slam dunk.”

“Be prepared to weep bucks while reading DARKEST FEAR… endearing and over-the-top lovable… the author’s mysteries are well-constructed, clever and tautly wrapped in a well-scripted story line.”

“A terrific novel… Coben’s professionalism is clear from every paragraph in the book.”

“Fast-paced and layered with both fun and tenderness… Coben is a gifted storyteller.”

“Raymond Chandler meets Bridget Jones…a constant and increasing delight… reminds us that vulnerability and strength come in all sizes.”

“With its pretzel of a plot and page-turning pace, DARKEST FEAR is a winner.”

“This fast-paced story sent me to the bookstore… looking for his earlier books. With the kind of sharp dialogue you used to hear in an old Billy Wilder movie… you’ll be surprised that the story also has so many pithy profundities about fatherhood.”

“Wonderfully rich… the heart of the novel is, as always, the fallible but infinitely appealing, accessible figure of Myron Bolitar – a Don Quixote complete with knee brace and cell phone, ready to take on the world’s problems.”

“The darkness of the plot and the seriousness of the theme – the responsibilities of parenthood – give this installment added impact. Thought-provoking issues and mind-numbing terror made more real by their human context.”

“Crisp, focused prose, a wise-cracking but gallant hero, and a busy plot make this essential for most collections.”

“A complete success on every level, with writing that sings with sharp wit, a white-knuckler of a plot, and well-drawn characters that can surprise you… stunning, complex… a marvel of carefully drawn-out tension. And just when you think Coben has made his last twist, there’s an even bigger one right around the corner… Coben deserves to be catapulted up into the top ranks of contemporary American mystery writers.”

“Chilling… his characters are as entertaining a gaggle of sleuths as any the genre has seen in, well, ever. Harlan Coben is smooth and versatile and his dialogue hums and throbs with character… Coben can set up ’em and knock ’em down as good as the best of ’em and better than the rest of ’em.”

“A thriller with a spark that burns throughout… fast-moving… Coben’s Bolitar is not unlike Robert B Parker’s Spenser… but Bolitar is more vulnerable and likable. Funnier too… A terrific job.”

“A good mystery – and Darkest Fear is a good one – is like an onion, peel away one layer and one, with a sting, awaits… [Coben] displays a moral reach, a soft touch. Darkest Fear, at heart, is about fathers’ relations with their sons, and vice versa… The best to date… Coben sets up the book’s plot with an imaginative touch and keeps it turning over with genuine surprises to the very end.”

“Very entertaining… Coben grips your heart then jiggles your brain with a plot layered enough to make an onion give up and go home.”

“Coben pulls off this latest thriller with his usual aplomb, blending humor and suspense into a compelling read… He pulls off a nifty surprise coda that ends the book on just the right note, one with the comforting ring of justice to it.”

“Fraught with emotion, action and plot, “Darkest Fear” demonstrates why Coben has won the Edgar, Anthony and Shamus awards.”

“Grabs you by the throat and refuses to let go. “Fear” is very, very good.”

“Coben leads the reader on a twisted, suspenseful path that, like a roller coaster, begins gently and smoothly until you reach that first extreme curve that puts your heart in your mouth… Sly humor, sophisticated plotting and solid storytelling meld well with bizarre yet totally believable characters… Coben has written the archetypal Boomer novel folded into a first-class mystery.”

“One of the most inventive plotters in the business… Myron runs rings around most of the tough-guy competition.”