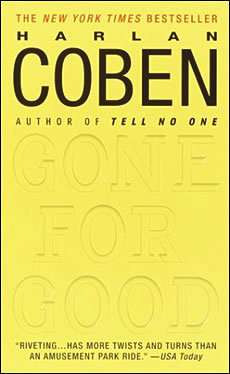 Now, in a bold new novel, Edgar-Award Winner HARLAN COBEN, author of the international bestseller TELL NO ONE, unleashes a haunting tale of secrets and betrayal… and of one man’s search for his missing brother that spirals into a breakneck hunt for a killer, a victim, and the truth.

Gone for Good is at once a powerhouse of suspense and a haunting tale of love—the love between brothers, between lovers, between family members. It is one of those rare thrillers that not only make the pulse pound, but stir the heart as well.

Chapter 1Three days before her death, my mother told me – these weren’t her last words, but they were pretty close – that my brother was still alive.

That was all she said. She didn’t elaborate. She only said it once. And she wasn’t doing very well. Morphine had already applied its end-game heart squeeze. Her skin was in that cusp between jaundice and fading summer tan. Her eyes had sunken deep into her skull. She slept most of the time. She would, in fact, have only one more lucid moment – if that she had been a wonderful mother, that I loved her very much, and goodbye. We never said anything about my brother. That didn’t mean we weren’t thinking about him as though he were sitting bedside too.

Those were her exact words. And if they were true, I didn’t know if it would be a good thing or bad.

“Coben stands on the accelerator and never lets up. Even well-meaning characters have secret agendas in a complex story line that bursts in a dozen different directions at once. Yet the action is seamless, clear and riveting. Every nook in Coben’s labyrinth of suspense furthers the story… The only certainty here is a surprise. Bottom line: Doggone good.”– People Magazine Page-Turner of the Week

“GONE FOR GOOD serves up everything you could ask for in a can’t-put-it-down beach book, yet complements its rocket-fast pace with a solid emotional underpinning… This one is even better than TELL NO ONE.”

USATODAY.com – Ah, sweet mystery of ‘GONE FOR GOOD’.
“GONE FOR GOOD (not a Bolitar story) is so riveting that by the end of the second chapter, even those mad for Myron will be glad to put the mystery-solving sports agent aside and get on with this story… this killer-thriller has more twists and turns than an amusement park ride. And Coben saves the cleverest for last. The loose threads come together, weaving a tight story. The final twist is a doozy… GONE FOR GOOD is great.”

“A thrilling odyssey with masterful twists and turns.”

“As you race through the chapters, you’ll find both breath-stopping violence and, unusual for the genre, real intelligence capped by psychological insight… The plot twists and turns toward the final denouement as Will starts to parse the meaning of family, of love and ultimately of forgiveness. Guaranteed: You’ll refuse to put this book down to slather on another layer of suntan oil.”

“A plot that thickens with every page, the characters are never what they seem.”

“This is superbly crafted, high-adrenalin entertainment.”

“GONE FOR GOOD is about as good as it gets, a chilling novel with as much heart and humor as horror, of which there is more than an abundance, plus a potpourri of memorably flawed characters and kooky killers.”

This month’s award for best mystery goes to Harlan Coben, whose GONE FOR GOOD is one of the most original and arresting mystery novels in recent memory… The suspense builds relentlessly, and the resolution will leave even the most jaded mystery reader surprised and shaken (Allow ample time for reading in one sitting!).”

“Another winner, guaranteed to keep readers awake all night… Complex and unpredictable, this is even better than Coben’s last novel, TELL NO ONE. Highly recommended.”

“A compelling read… the characters are downright fascinating… Coben fans will love GONE FOR GOOD.”

Ingenious and gripping, this is another thriller to stir the heart”

“Coben has written one of the most expertly paced, unguessably twisting plots I have come across in a long time.”

“A propulsive thriller, a touching love-story and a subtle analysis of dysfunctional familes… Coben creates a host of striking characters, none of them chillier than Ghost, a terrifying seemingly invulnerable Hitman… this is a top-notch thriller”

“He is a superb writer and a devilish plotter… this story is exceptional.”

“Forget sleep. GONE FOR GOOD will keep you turning pages well into the wee hours Coben’s maze of plot twists and turns amplifies the tension unrelentingly, until the very last moment.”

“The plot zips along on a fast track with plenty of twists and turns… Thrillers this satisfying clearly have the Coben stamp.”

“Taut, gripping… What makes Haran Coben so special is his ability to pick ordinary people who harbour extraordinary, and often deeply dark, secrets… there’s no let-up in the pace or the surprises. Coben keeps pulling out rabbits right up until the very last page.”

“This twisty treat is one of the best thrillers you’ll read this year.”

“Hitchhiking with Gone for Good pays off; it’s a ride you won’t regret taking.”

“A wild, non-stop ride… Coben has a gift for creating colorful and believable characters, and his dialogue is terrific… Gone for Good is a treat.”

“…another nail biter suspense novel with more twists and turns than a labyrinth.”

“…Thrillers this satisfying clearly have the Coben stamp.”